FIA Pre-Budget Representation to the

Excessively priced Jet Fuel (ATF) in India is a long-standing and an unresolved issue which is contributing to the large losses being incurred by the Indian Airline industry. The ATF-imposed cost burden on Indian carriers not only makes them steadily lose fiscal-competitiveness, but also leaves the airline industry with fewer resources to invest in its future - in enhancing passenger servicing; in revamping fleet & facilities; in retaining its employees; and also in expanding air connectivity in India.

ATF rates for domestic operations in India are priced 70%-90% higher than international benchmarks. Fuel alone accounts for close to more than 40% of the total operating costs for airlines in India.

The wide-variance between the international bench-mark ATF price and the price paid by Indian carriers, can be seen from the below table on ATF price at different stations in October 2007. This price variance needs to be corrected. 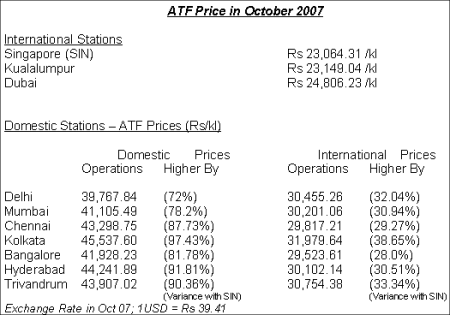 ATF prices for domestic operations include Customs duty of 10%; Excise duty of 8%; Sales tax averaging across the country at 23%; throughput fees charged by the airport operators; and marketing margins by oil companies.

India is also a net ATF exporter and the Indian oil companies sell the same in the overseas markets at basic prices lesser than that offered in the domestic market.

To address this 'unsustainable' disparity in the price of ATF for domestic airlines, FIA would urge the following measures for ATF pricing in India, to restore some parity with costs of other modes of transport as well as international carriers; II. SERVICE TAX

FIA would request review of the applicability of Service tax on F&J class tickets on international travel; and on landing and air navigation fees.

FIA would thus urge that Service tax on First and Business class tickets; and on landing, airport and air navigation fees should be removed.

Finance Act 2005 had introduced a tax on fringe benefits. This tax has also been made applicable on free / concessional passages granted to airline executives and family; expenses for crew; hotel accommodation provided to passengers due to delays & cancellations; and expenses on catering and inflight entertainment.

None of these items can be considered 'fringe benefits'; and FIA requests these items to be removed from the coverage of FBT.

IV. SECTION 72A BENEFITS OF CARRY-FORWARD & SET-OFF OF LOSSES FOR AIRLINE MERGERS

The environment in which the different airlines operate & the high capital costs associated with the airline business, are the same for both the public and the private sector airlines.

FIA would urge the provisions of this amendment to be also made available to private sector companies engaged in the business of operation of aircraft.

It has been opined by the Service Tax Department that availment of credit of Excise duty paid on ATF is not available under the provisions of the CENVAT Credit Rules, 2004 ("CCR, 2004") as is in force today.

This view is contrary to the language and scope of the provisions of the CCR, 2004, in terms of which credit of Excise duty is available in respect of all "Inputs" other than specifically excluded inputs. Non-allowance of credit to the airlines on ATF is against the fundamental principle of the CENVAT provisions which may result in the cascading effect of taxes. In this regard, a representation has been filed with the Ministry of Finance on 28th August' 2006 submitting that:

It is therefore, requested that the Ministry affirm and clarify the position that CENVAT credit on ATF is available since 10.09.2004, as per the provisions of the CCR, 2004.

Prior to deletion of Section 10(6)(vii) of the Income Tax Act 1961, foreign technicians enjoyed tax exemption for a period of 36 months from the date of arrival in India. This helped several industries to develop the necessary skilled personnel for management of the industries which needed skilled and technical personnel.

The shortage of pilots in India is well known and whilst the steps have been taken to recruit more first-officers, the latter would take minimum 2500 flying hours or 3 years to take command. The Airline industry has missed this exemption and an exemption in line with the afore mentioned section would help the industry to attract foreign Pilots and Engineers, till such time the local talent is developed.

In addition to the above, FIA would like to request that these below earlier recommendations of the Airline industry be also considered favourably;

VIII. REINSTATE EXEMPTION FROM PAYMENT OF WITHOLDING TAX ON LEASE RENTAL INCOMES ON AIRCRAFT AND ENGINES EARNED BY A NON-RESIDENT LESSOR FROM AN INDIAN COMPANY